Add to Wishlist
Category: Other 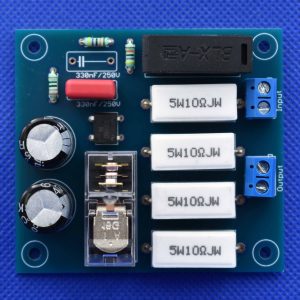 The delay is intended to switch on the mains to heavy loads gradually to ensure that the switch-on current
remains within certain limits and to prevent the fuses from blowing. The elements that cause high currents
at switch-on are, for instance, the electrolytic capacitors in the power supply of an output amplifier.
Since these are not charged at switch-on, they constitute a virtual short-circuit on the supply lines. The
current can, however, be kept within limits by inserting the present delay circuit between the mains outlet
and the transformer primary. The amplifier is then powered in two stages:
in the first instance, the current is limited by a number of heavy-duty series resistors a second later these
resistors are shunted (short-circuited) by a relay contact.
In the diagram, R4–R7 are the heavy-duty series resistors, each with a value of 10 ohm and rated at 5 W.
They limit the switch-on current to about 5.5 A. After relay close, the 230VAC PCB rail is ready for 2000w
continuous.
The relay is a type whose contact is rated at 2000 VA, which will be sufficient in most cases. Its supply is
derived directly from the mains via potential divider R3-C1-B1-relay coil. The resistor, R3 limits the current
at switch-on, after which C1 limits the current in normal operation to about 20 mA. The delay time is
determined by electrolytic capacitors C2 and C3 in parallel with the relay. The delay time may be altered by
suitably changing the value of one or both of these capacitors.
For safety’s sake, the board also has provision for a mains fuse, F1. The rating of this depends, of course, on
the current drawn by the load. It should be noted that in the case of a double-mono stereo output amplifier
(with separate power supplies) each of the mono amplifiers must be given a mains-on delay.
Note that C1 is a metallized paper type, wich is designed specially for mains voltage applications and meets
stringent regulatory requirements. Finally, at all times bear in mind that the circuit is connected to the mains,
so do not touch anything inside the unit during operation and make sure that all wiring is safe and secure.
Kit is built with high quality components such as Omron Relay and Uni ohm resistors.