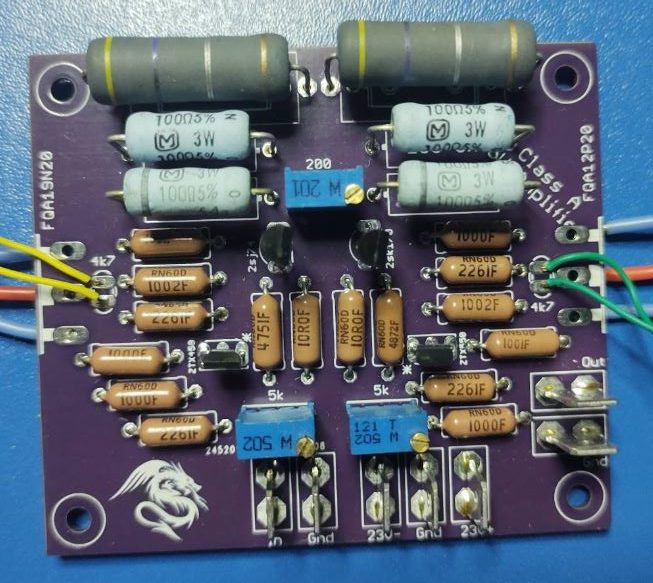 Hello All , this F5 amplifier from Nelsson pass I liked a lot, so I decided to do revision. In this revision there is nothing special what I have do , only redesigned few things in order to make space for small fet’s . Now I have enough space on the board and it is possible to connect them together. If you are still in doubt which A class amp to build , I have to say that this one can be very good choice. It is not hard to build and sound’s great. As always small audio test can be heard on my facebook page HERE .Due to many people have issue to setup this amplifier first of all I have to say, that your life will be much easier if you have 3x DMM . In order to make it good, speaker output and bias must setup at same time, parallel . When you setup bias, at same time have to setup speaker output.

In my version , to get 0V bias , I first turned the screw on left 5k pot. to the end position by turning it to clock opposite. Right 5k pot. in order to make 0V bias I have turn at the end but this time in same direction as clock. Setup DMM to read DC voltage. One dmm clamp on 0,47Ohm 5w resistor , other one to second 0,47Ohm 5w resistor , third dmm to speaker output. Now slightly increase value of 5k pot’s . After some time value on dmm will start to increase. At that point you have to be very careful with 5k pots , and play with them to get on both pot. clamped on, 0,47ohm 5W resistors, 0.6V what is equivalent to cca. 1.3A bias . And at the end have to say, this value have to be setup when amp is warmed up. From the cold start, as you can see on my video, that value shortly will go over 0,6V but NTC resistors will compensate it quickly and it will drop down to 0.6v when amp warm up.